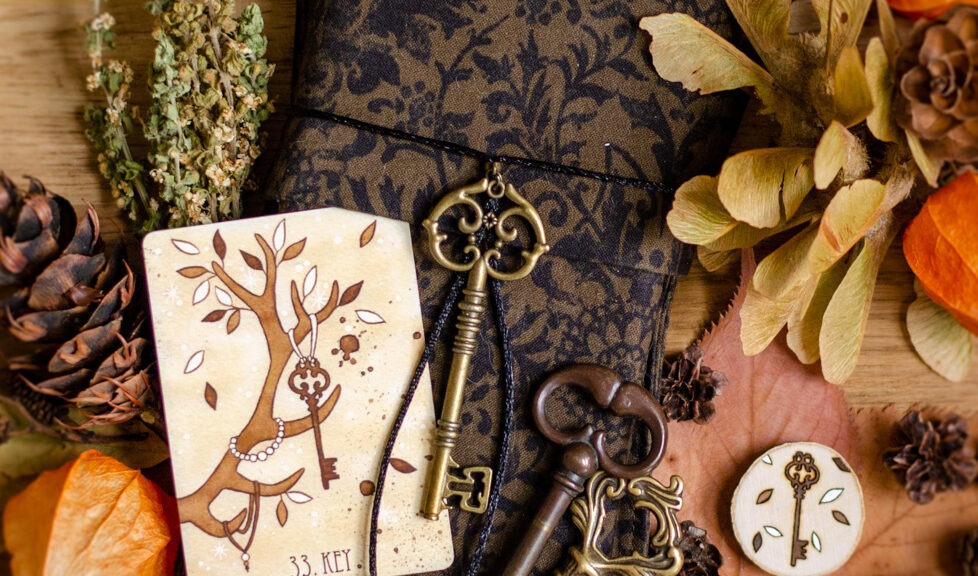 There’s at least one thing I didn’t tell you yet about Wildera Lenormand: while I was painting the cards, I intentionally sprinkled the images with private jokes, symbols, and secret nods to personal objects. I couldn’t go through all of them in a single article even if I wanted to, so let’s start with a couple of stories for now. We’re going to talk about two cards today: the Key & the Cross.

These two form the “Amulets” category of the deck (more on that in another upcoming post), and they have very special meanings to me. They’re actually inspired by real objects I usually keep either on my Main Altar or next to my Tarot Table. You may think there’s not much to the story of these objects, it’s just daily life stuff after all, but I believe there’s a reason why certain memories stick and stay overtime. In fact, it’s the kind of thing that shouldn’t be overlooked; the most defining moments of our existence often happen inconspicuously.

All right, the first one will be quite short, and could be summarized in these words: I love Keys, and I have a tendency to collect them. They have a special place in my spiritual and witchy practice. Magical Keys are able to open gates and doors, unlock situations, keeps things locked away, be they precious or undesirable, etc. I mean, what can’t they do, really?

As I was saying, I have a bunch of them. The old metallic kind, with intricate designs and a patina that makes you wonder about their history and life. The doors they used to open, the secrets they had to keep hidden in the dark. Wildera Lenormand Key Card is a mix of several keys I own. One is a key that belonged to my Grand-Mother and has specific memories attached to it, another is the one I mostly use in my Spells and Rituals. The main one though, is the Key that lives on my Visconti-Sforza Tarot bag.

Sure, it’s a really personal nod to a really personal object. It’s just my own copy of this deck after all, but still. Tarot has been the leading pathway to my exploration of Lenormand as a new divination tool, so it’s only fair that I created some sort of link to this Tarot Deck in particular, the oldest that we know of, and one that I value a lot in my collection.

Let’s talk about fate now, one of the associations that usually goes with the Cross Card in Lenormand. I don’t believe in it, but I must recognize that sometimes, things seem to be meant for you and no one else, events happen at a specific point in time and not another. The Cross that inspired my painting plays a part in one of these Signifying Moments.

Picture me as a teenager in vacation in Brittany, France, in a medieval city where you could find attractive Artisan Shops flavored with Celtic inspirations and designs. There were plenty, but one in particular caught my attention. My eyes were drawn to this intricate pendant on display, and that’s it, love at first sight. Next thing I know, I’m inside the shop, talking with the owner about his work and technique. My Mom acquired another piece that she liked, and as tempted as I was to leave with this piece of jewelry, I didn’t purchase it. I’m an under-buyer… don’t ask.

The end of the week goes by, and the only thing I can think about is the Cross. It’s calling me so loudly and persistently that I can’t ignore it. I decide to go back there on Monday, begging my parents to drive me there. We’re on vacation, remember? The schedule is real, there’s a lot to see and experience in the region. We don’t have any time to spare to visit the same place over and over, especially for one silly purchase of a holiday memento that I missed.

But I must have been pretty convincing (or was I just too adorable to resist?) because on the next Monday, we’re back there, standing in front of the shop. Which was closed by the way, like many shops on Mondays when you’re in France. Bummer. Maybe the Cross wasn’t meant for me after all? Since I eventually got it, I guess you already know that it was.

So, vacations are over now, it’s time to make the trip back home. I’m trying as hard as I can to let go of the desire to have the Cross with me, but I can’t help but feel frustrated, confused, and kinda sad about it. In the end, I don’t know why we ended up driving near this city once more (it was absolutely not on our way), but we did, and we stopped to visit the shop for the third time. Thankfully, the Cross was there, still waiting for me.

I don’t know why this particular trinket called me with such a loud voice at that particular moment. I just recognize that we were meant to share our journey. Our paths crossed (no pun intended) and never parted since that day. It’s actually one of the first items I packed when moving to the US; it was to come with me, no question.

This object means a lot of things to me, spiritually speaking. It has a very special place in my life and, as a result, has always lived on my Main Altar. It’s like a good-looking reminder that I must listen when an intuitive tinkle makes itself heard, and act when the call is strong. Today, the Cross also has its place in the very first Oracle Deck I created, and I’m happy about it ♥

One other thing before I leave it there, in case you’re wondering, this fantastic Piece of Art has been handcrafted using recycled horseshoe nails. How’s that for a Lucky Charm? Plus, it was a really sweet way for me to end Wildera Lenormand: the first card pictures a Horse; see how the circle is complete here?