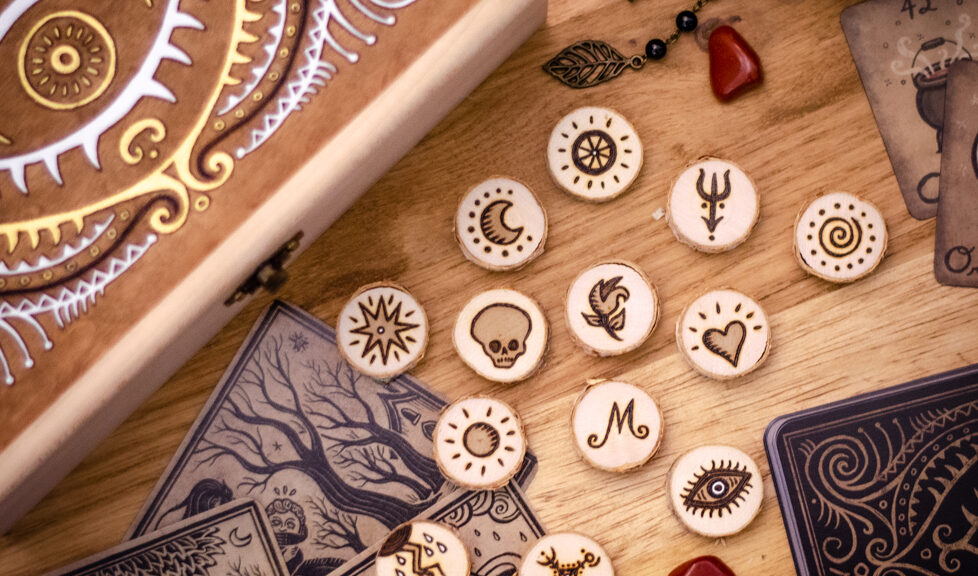 I know, it’s a mouthful. Sorry about that, I’m still working on the name.

I really don’t want to call it a Rune Set, simply because it has absolutely nothing to do with Norse Runes and the various Futharks that exist. Love them, use them, but they aren’t related at all. I could go with something like Mildred Payne’s Wooden Oracle or Wooden Amulets, but I don’t know, it kinda lacks a little flavor or something.

Charm Casting Oracle is the best I’ve thought of so far. It’s not great, but it works for now. Maybe I’ll find something better as the Dark Season keeps growing.

Gosh, it usually isn’t so hard for me to come up with a meaningful name for something I created, but this one… I don’t know. I’m struggling. Any suggestion will be very much appreciated, so feel free to comment down below if you have a Bewitching Name in mind for this Divination Set.

All right, less talk about potential names, more about the Oracle itself. I suppose it is what you were hoping to see when you clicked to reach this page after all.

To be honest, I had pretty much no idea of the symbols I was going to burn on the wood when I started this project. Just like when I created Mildred’s Treasure Box in September last year, the whole idea of it was spontaneous and not planned at all.

Some of the symbols I pyro’ed were quite obvious right at the beginning: the Skull, the Initial “M” (my name starts with the same letter so it’s pretty convenient and provides me a Significator Card equivalent if you’re familiar with Tarot or Lenormand lingo). The Staring Eye that is represented on the back of the cards, both the Secret Pocket Oracle and the Oracle of Black Enchantment. The same that I painted on the top of my Treasure Box.

Others like the Pitchfork, the Sigil, and the Lightning Bolt only manifested themselves once I put myself to work and had already created a few pieces.

One thing I did know before starting though, was that my Charm Casting Oracle would be made of thirteen pieces of wood. Thirteen pieces, because… Okay, do I really need to justify it? I mean, Mildred’s universe is shrouded in this aura of magic and superstition, haunted with Black Cats, Crystal Balls, and Devilish Creatures of all kinds.

Thirteen just made sense, it couldn’t have been any other number really.

As for what they each represent individually, well, I won’t make a list since I tend to interpret them intuitively during my readings, just like I do with Mildred Payne’s Secret Pocket Oracle. They are actually kind of similar in the sense that they both represent things in a very simple manner: one symbol per card / piece of wood, and that’s about it. The symbols themselves have pretty immediate and easily-triggered associations.

More often than not, the Heart will relate to the matters of emotions and love and desires. The Storm could talk about a sudden, unexpected change, whereas the Wheel will indicate a situation moving at a much slower pace. The Star could represent hope, and the Flower growth. Nothing really complex here as you can see. But it gives you a good start to then go as far and deep as you want to.

It was indeed my intention with this project: keeping it simple, just adding a little something to the Oracle Decks I already own and use and love. One thing to consider in Mildred’s storyline is that she is supposed to be a child (a weird one, but still), and in my thought process, these tiny Wooden Amulets had to be reflective of that somehow. Which is why I went with these cute little doodles that can easily be interpreted without having to refer to a long list of keywords and meanings.

In the end, it’s all about letting the Inner Child play for a while and have fun intuitively creating narratives, stories, and interpretations.

Since I created the Magical Box to contain my copies of Mildred’s Oracle Decks, I’ve found myself adding more and more trinkets to it over time, crystals, and even a few pieces of Enchanted Jewelry. This Wooden Amulet Charm Casting Oracle Set – or whatever we’ll end up calling it someday – is one of my favorite things to enjoy right now.

Despite the Dark Thread woven into the rich universe created around this fictive character, having this combo of cards and wooden charms actually brings a lot of playfulness to my Divination Practice, and I adore it.

Oh, one last thing before someone asks, I obviously won’t sell this Divination Set in the shop when it reopens. The creation of Mildred’s character, story, and oracle decks is only due to the Imaginative Mind of Patrick Valenza from Deviant Moon, and I have absolutely no claim on anything related.

This is just a fun Personal Project that I made for myself and wanted to share with you today, without any commercial intention or purpose. So please don’t expect to see this Wooden Oracle in my shop at any point. There will be plenty of other cool stuff though.