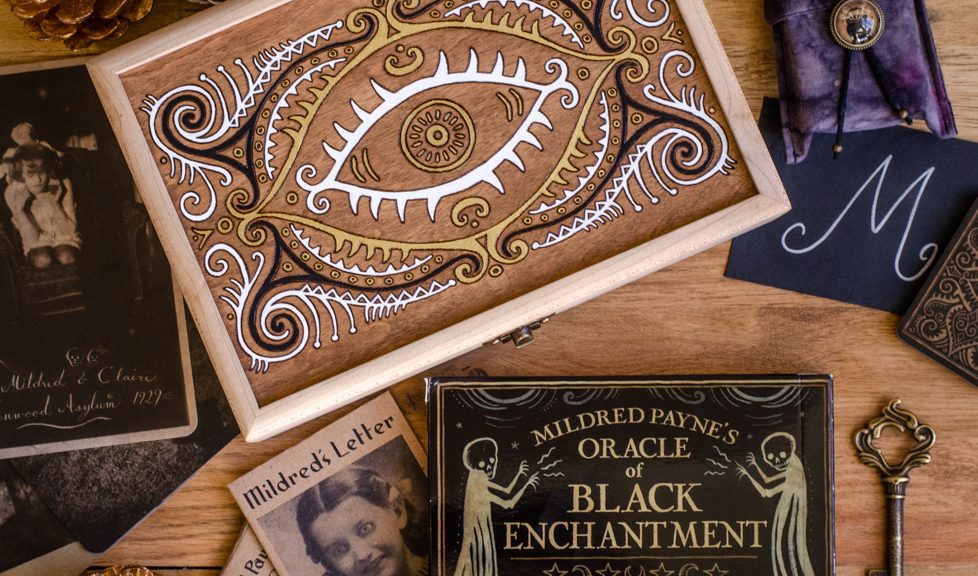 As you probably know by now, I’m an avid Tarot and Oracle consumer, always looking for the next Artistic Gem to add to my collection of decks. I’m also very mindful about the new ones that I want to bring home with me as once they are here, I tend to care for them passionately.

I mean it, each one of them end up being nested comfortably in some sort of Personal Home, be it a bag, a box, or a dedicated shelf / altar of their own. As for today, most of them have their own beautiful unique custom made little bags, swapped with a skilled friend of mine who – unlike me – knows her way around a sewing machine. And some others have their own personalized Wooden Box.

Today I’d like to share one of these with you, partly because I’m quite proud of the work I’ve done on it, but also as a sort of tribute to the Artist who inspired it in the first place. Deviant Moon Tarot, Trionfi della Luna, Mildred Payne’s Pocket and Black Enchantment Oracles… Patrick Valenza’s decks hold a special place in my collection, so I had to create something really special, at least for two of them.

A few months ago, inspired by the thrilling storytelling built around the character of Mildred Payne, I started to imagine a Secret Treasure Box in which her decks of cards could rest. A precious wooden box, that could have been smuggled by little Mildred herself on her way to the Asylum. A box that would keep her Dark Secrets safe, hidden from the insanity of the world outside.

As you can see here on the top of the box, a good portion of the Eye Symbol – aka the back design of Mildred Payne’s Oracle of Black Enchantment, which I love so very much – is filled with gold leaf. Technically speaking, and only for this part of the work, I am talking about 6 or 7 hours bent on my table.

Absorbed by my creative journey with this box, I completely forgot to count how long I spent on the pyrography, the walnut ink staining, and the black and white painting besides the gilding. I bet it easily doubles the count of hours though.

But oh boy, was it worth it!

In the daylight, you probably won’t really notice the gold if you just pass by and don’t consciously pay attention. But when the Dark Veil of the night falls and you light a couple of candles beside it, you will find a whole different story there.

The gold starts to glow, becomes brighter, unveiling its secret magnificence in the shadows, reflecting the Dance of the Flames in its core, silently revealing what’s hidden in the layers of darkness.

Having to find out what is waiting for you underneath, you can’t resist to open the lid and you suddenly find yourself facing this Devil figure flying in the Night Sky. A reminder that even in the Realm of Shadows, forgotten gems are lying there, waiting to be revealed by the soft light of the Moon to burst like the Stars.

Creativity is born and can only arises from the deep black soil of the unconscious mind, and in her own twisted way, poor little Mildred probably knows it better than anyone else. And I bet his Creator knows it to, because he did a fantastic job with these decks, giving a voice and a staring eye to the darkest layers of the human psyche.