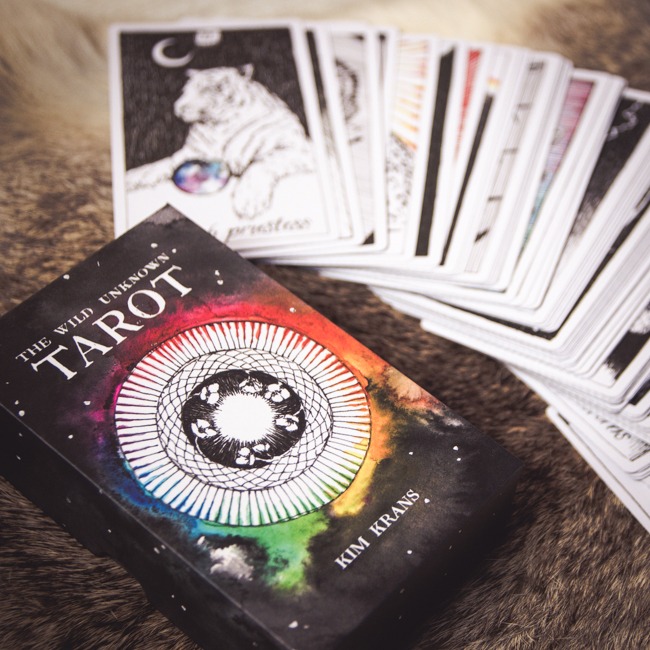 Since the last article where I showed you my collection of Tarot and Oracles, a bunch of decks have been added to it. I guess it’s time for me to do a little update while talking a bit about my new sweeties!

Ahhhh this one… It’s a long story, but let’s keep it short! The Wild Unknown is one of those decks that I kept putting on my wishlist one day, but then I pulled it out, and next thing I know, it’s on it again, and so on. This Tarot has always attracted me in a way, but with some kind of bittersweet taste, like “meh, you know it won’t work with this one”, or “nope, won’t be a match anyway”. Plus I had mixed feelings with a great number of its cards after seeing them online, which always made me hesitate about purchasing it, despite the great hype and success this Tarot had since its release.

In the end, my husband gave it to me as a birthday gift, totally unaware of my thoughts and feelings about it. And ohhh, such a great idea he had! Once I had this Tarot in hands, it just clicked with me immediately. No more dilemma today: have it, keep it 😛

This is a pip deck, non scenic minors, and more of a collection deck if you ask me, considering the gigantic size of the cards. I love huge cards, they really magnify the illustrations and allow to dive deep into the details. But with these ones, well, you have to prepare a really substantial space if you expect to draw more than four or five cards at the same time. Aside from this little (haha) detail, this reconstruction of an old Tarot is magnificent, and the companion book is pretty nice too.

On a personal level, it’s also a sentimental deck, just because it reminds me of some summer holidays spent in Italy, where I was able to visit the Sforza castle in the city of Milan.

Unlike the Wild Unknown, there wasn’t any hesitation at all for this Tarot. I knew it more or less, seen it here and there, but I didn’t pay attention to it until a particular moment. When I randomly found the borderless edition, I really saw it (seriously, most of the decks should be borderless). It’s hard to explain but this deck came to me just at the right moment, even if I didn’t know precisely why at the moment I purchased it. I only realized how much I needed it when I received it.

As you probably know, it’s an excellent Tarot for shadow work. It already helped me to confront my own fears, anxiety, and doubts, to work on past wounds and traumas, to get myself familiar and aware of my own darkness. Despite its tendency to dive deep into your feelings and to take you on a path that will without any doubt hurt you and make yourself uncomfortable, he does this with a strong sense of humor (black obviously).

Different Tarot, same author. This one is a pip deck that I adore, with gorgeous vintage-ish watercolor illustrations, surely as disturbing and sarcastic as its cousin just above. Considering how much the Deviant Moon suited me, no need to tell you that I felt an obligation to purchase this one too. And I don’t regret it, it’s such an amazing Tarot deck!

I’ll just quickly add some info on this deck before I can make a full review: the first edition was a 22 major arcana only, which I think would have made me hesitate a bit, but Patrick Valenza completed it since. Only available in Italian for now (a French version was released, limited to 100 decks, but I didn’t get a chance to have one before it went sold out, unfortunately), this Tarot exists in several other versions: one in negative colors and two others, named paradoxical blue and purple, made to reveal themselves under a black light. Pretty cool, right?

Let’s continue this list with the Oracles now, beginning with an adorable-surprise-birthday-gift from a lovely friend who knows my wishlist even better than I do ♥

Of all the decks currently in my possession, this is probably the most complex to use and interpret. On the one hand, because it is entirely related to the concept of the great loving divine – which is really not the easiest to apprehend for me – and on the other hand, because the poems of Rumi on which this Oracle is based are themselves so rich, that in the end, each card has a multitude of facets and interpretation possibilities.

But this is also one of the most beautiful decks I currently possess: Rassouli’s artwork on the illustrations is really stunning, and the intensity of its colors leaves me speechless every time I look at a card. It’s the kind of Oracle that speaks directly to the heart, without the need for words. He’s elusive, deep, and at the same time incredibly sweet and kind.

As you could tell by its name, this is a botanical-based deck, totally different from my Druid Plant Oracle though. The illustrations are less detailed, with a vintage scent that I like so, so much. I found it on Instagram and I immediately fell in love with the author’s floral universe, a mix of elegance, enchantment, and magic.

Some plants you can expect to find in this beautiful Oracle: mugwort, hawthorn, periwinkle, comfrey, rose, celandine, bindweed, valerian, hyssop, hyacinth, Dahlia… A few well-known witchy plants too, such as henbane, foxglove, aconite, Mandrake or belladonna.

Note that a Tarot with similar style has been created too, named Ophidia Rosa, one that is already on my wishlist and that I definitely will purchase some day.

Warning: cute cats coming here! I got to tell you, I just fell in love with this awesome deck the first time I saw it on Instagram too. I love the art, the watercolor use, the squared format, the feeling of the cardstock… I loved it even more the day I received it, accompanied by a bunch of little treasures like postcards, a wooden coin, a lovely chevron amethyst, and I probably forgot some other things.

I know, it’s an Oracle that can seem a bit fluffy when you look at it, or maybe over-positive, but make no mistake, not only is it cute, but it’s also extremely accurate. The messages written on the back of each card are pretty well thought and written, very encouraging without being simplistic. I personally see it as a hug-deck, one that makes you feel good simply by giving you a huge dose of sweetness and benevolence while helping you to go back on track. Purrs come as a bonus ♥

Again, an Oracle that wishes you well! With some kind of primitive accents in the imagery that allows the intuition to flow freely, perhaps guided by the different keywords on the bottom of each card. It’s been a while since I wanted a deck like this, an Oracle evoking something primal, ancestral, rooting, calling the instinct instead of rational thinking.

I’ve kept my eyes on John Matthew’s Shaman’s Oracle for a while, but I don’t know, there’s something in the imagery that didn’t resonate with me. Not to mention the way it works which looks very complicated. In the end, I was right to wait a little bit longer, for the Shamanic Healing Oracle happened to came into my life, perfectly filling my wishes and expectations.

I already talked about this one last time, while presenting the Middia Lenormand, the very first deck of this type I bought. Well, it has not been long before I finally got the Celtic Lenormand too. Illustrated by Will Worthington, this oh so talented artist that I admire (just in case you didn’t know already), this deck is a bit different from the traditional Lenormand, with a nice Celtic twist, and a few alternatives cards.

Since I was just beginning to explore the Lenormand system when I purchased it, I was a little bit afraid that I wouldn’t be able to use it right away. Because, you know, the differences and modifications made are quite significant. But in the end, it wasn’t the case, and today I’m pleased to look at this enhanced Lenormand as a great companion for my Wilwood Tarot and my Carr-Gomm’s Druidic Oracles.

I can honestly say that to this day, this is the only deck that disappointed me when it arrived, but I’ll probably talk about it later, in a review or else. With that being said, it’s a cute little deck, with a sweet Halloween flavor. Skeletons, bats, spiders, and witches, all those traditional characters made their way to the party here, along with a few tombstones, coffins, and an absolutely adorable scarecrow (the very one that makes me buy the deck if you want to know).

I like Halloween time, I like Halloween stuff 😛 Actually, it makes me think about another Oracle on my wishlist based on this theme, and hey, look at the date! Halloween’s coming soon…

Did I already mentioned that I like Patrick Valenza’s artistic work? 😀 I kept this deck for the end of this post, just because it’s kind of an alien, a Lenormand-like divinatory system wrapped in a thick aura of mystery and madness. Picture an old asylum burned to its ashes, a creepy doll found in the remainings, and an old blouse hidden in a wall with a bunch of mysterious hand-drawn cards in its pocket… Is this a real story, you ask? It doesn’t really matter, the tone is set and it’s spooky as hell, with a pinch of Burtonian spice that makes it perfect for Halloween too!

Actually, the author tells this narrative way better than me so I can only encourage you to go see for yourself here and read the strange story of poor Mildred Payne. As for the Oracle itself, I’ll talk more about it as soon as I get the time to become familiar with it since I only have it for a very short period of time.