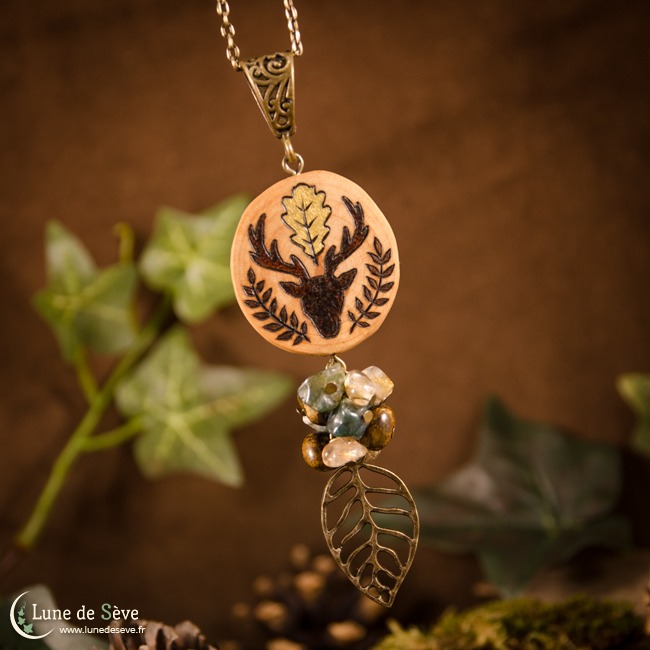 I usually can count on two very intense creative times during the course of the year: when Fall’s coming (how can’t you be inspired by all these explosions of warm colors and enchanting scents?) and at the beginning of Spring, a period during which my workshop vibrates with the rise of the sap and the singing of the birds.

In Winter, I’m more like a solitary bear, hiding inside a blanket with a hot coffee mug, waiting for brighter days to come (although it’s not always the case because of all the work Christmas brings me as a solo entrepreneur). What about the Summer you say? Ohh Summer… Well, try picturing yourself working with a burning tool while it’s 100°F outside, and pretty much the same under your roof. That’s it, that how my motivation goes when it’s time to turn my favorite tool on during this awful season.

By the way, Summer is actually almost here. But this year, I noticed that my usual creative fever of Spring didn’t really manifest itself. I think I even had to push myself a little harder sometimes to get something from my tools and pencils. I had big plans though, and clear objectives… Actually a lot of to-do lists and planning and stuff. Ready for all possibilities! Or… maybe not?

Where and why did it go wrong? Nevermind, it doesn’t matter anyway, I’ve stopped to look for the reasons to concentrate more on the rest. Concentrate on my inner flame, the one that burns with this desire to create freely, but that I managed to repress by constantly restraining it, directing it in the way of other people’s expectations. “You should do this”, “You need to do it that way”, “Why don’t you d…”

Hush! Silence, please. I’ve decided to listen to myself before anybody else. I have to restore the balance to be able to give you the best version of myself. Because, you know, if my shop keeps going, it’s obviously in a big part because of you who support me, but the very beginning of this project lies in this teeny tiny creative seed that I wanted to see growing, a seed that I own, born within me, a part of my essence that nourishes me every day.

If this little seed were to disappear, it’s really simple, the shop would just stop with her. Anyways, I’ve been looking at the past two years, but honestly, I didn’t expect to realize how big the gap is between what I once dreamed for my workshop and what it has become.

Just to be clear, I’m glad and grateful and even amazed by all that’s been done until today, and I’m really happy with all the meetings that my activity made possible (I always kind of ramble about this subject, but it’s so true, I can’t help it ♥). But in the end, I feel like I’ve missed a cross somewhere, and while I was busy misreading the indicator signs, I lost the sight of the direction I first wanted to follow.

A few weeks ago, I almost killed my sage plant. An unfortunate mistake I made, and all of a sudden she was totally burned from the inside. After several days spent desperate to see her hurt so badly, sad to watch her leaves turn brown and die one after the other, I finally grabbed a pair of scissors and folded it completely, cut to the ground. Come what may, right? Now I know I made the best decision because I’m contemplating her new soft fluffy leaves, I watch them grow day after day, enjoying this lovely tender green hue, a sign of vitality and life.

This plant won’t give me anything to harvest this year, but I don’t mind, she already gave me a gift. She reminded me of this: rather than fighting needlessly, it’s sometimes better to cut at the base, remove the lost branches, and keep the remaining energy for new buds to appear.

So a few days ago, I’ve put down my brushes. I’m going back to the essential. Back to the beginning, back to pure pyrography.