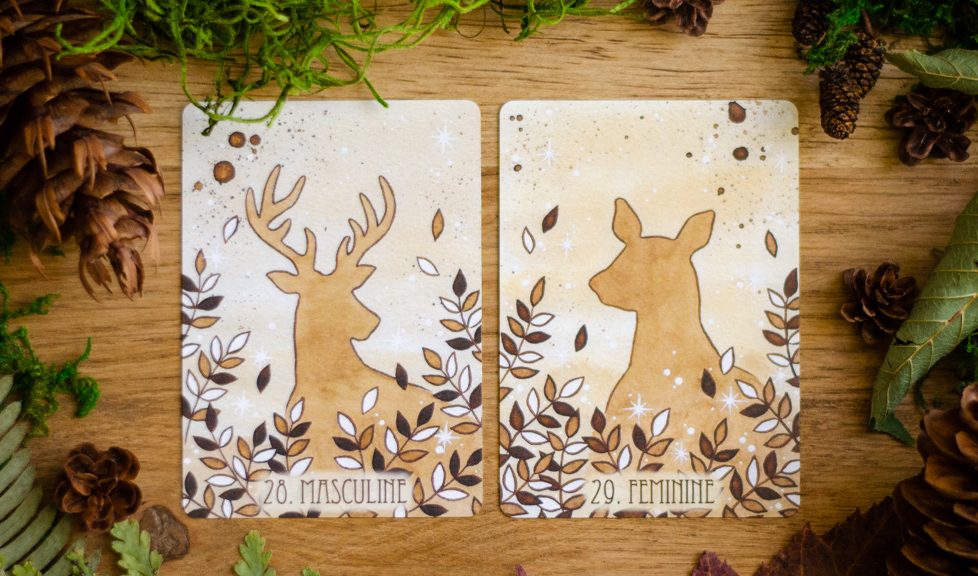 Traditionally in the Lenormand system, there are at least two cards that stand a little bit apart from the others, and are not really used or read in the same way. I’m talking about cards 28 and 29, also called the Significators, the Man and the Woman.

The thing is, I’ve chosen to rename this couple of cards in my own Wildera Lenormand and went for a different imagery. Let’s talk about that.

The first reason that brought me to make this choice, is that I wanted to be as inclusive as I could be regarding to the gender issues you may find in a classic Lenormand Oracle. Having a binary system of Man and Woman only, just like in the traditional imagery, seems restrictive and somewhat outdated to me.

That’s why I decided to go with the concepts of Masculine and Feminine instead, highlighting different qualities that can be found in everyone, regardless of their biological sex. My hope is that this gives an opportunity to anyone to be able to recognize themselves in one or the other at any time in their life journey.

It can be a challenge to include all sorts of people in only two cards, but it is expected in our modern society, with good reasons. There are solutions available though, and it may just take a little bit of creative thinking to do so. The first step in this direction is to have an open mind and be willing to move away from the old paths carved by tradition.

As I was working on my own Lenormand deck, I was reminded of a very short but powerful affirmation. It came to my mind at several occasions, repeating itself like a mantra, refusing to leave my mind and thoughts: “All is one”.

Regarding this deck, this statement is true at a macro level, where the different personalities of the cards are all bound together, revealing harmony and unity to create one whole piece. And it is also true at a micro level with these two particular cards: one couple encompassing as many possibilities as you’d allow.

“All is One”. Three simple words, forming the precious Silver Thread that weaved itself throughout the entire creation of this Oracle deck, linking it to myself and – hopefully – to the rest of this beautiful and sacred Living World.

This thread actually leads me to the second reason for my choice of word and imagery: since the beginning of this project, I knew I was going to create a Lenormand deck without any human pictured in it. I wanted to be reminded of this mantra every time I had to search for my Significator Card – or any card at all for that matter.

To be able to find my own soul in the eyes of other creatures, to recognize and blend myself into the shape of their silhouette, that was the goal here. I wanted to have the possibility of Shape Shifting while working with my Lenormand deck, and I realized pretty quickly that I wanted you to be able to do the same.

To do so, I ended up choosing a couple of animals and pictured the two Significator Cards as a Deer and a Doe. There’s some personal symbolism behind this choice. I tend to associate the idea of Sovereignty with the Stag Archetype, so obviously, I wanted him to be one that stands proudly apart from the rest of the deck, like the Forest Emperor that he is.

Following up with this idea, I made a pretty similar modification to the Child Card of my Lenormand Oracle. As you can see, there’s no human pictured here either. Instead it is an adorable little fawn lying on the grass, sheltered under the shade of trees, enjoying the sweet and fresh breeze of the wind rustling the leaves.