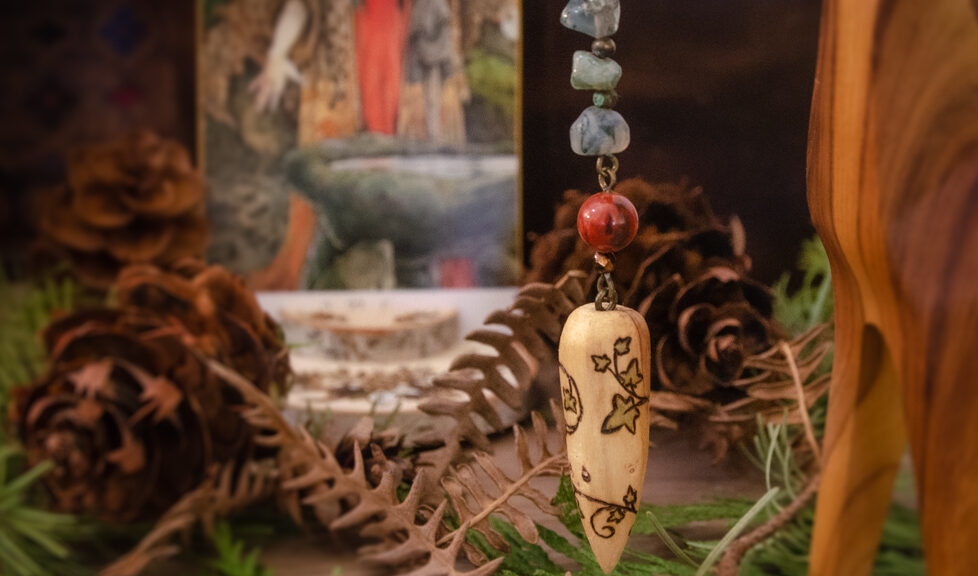 Today I’d like to start a mini-series of articles on this blog, in which I’d talk more about the various different creations that I offer in the shop. Basically let you have a peek at what inspired me to create them in the first place, how I incorporate them into my own journey and practice, and what is involved in the process of creating them.

Since I’ve been creating a lot of them recently (hint on what will be in the next collection), I thought I’d give the honor to the Wooden Pendulums. It’s not the first time that I make and offer this kind of Divination Tool. While I was running Lune de Sève, my previous online shop, I was already offering some but they were a bit different.

Actually, I had a bit of a journey with the pendulum as a Magical Tool. So let’s start with the beginning, shall we?

At the early stage of my Spiritual Path, I quickly became interested in owning and using a dowsing pendulum. I tried several different things with my first one, from simple yes/no questions to communicating with the dead. It was a gemstone pendulum, with a faceted quartz crystal weight, and I bought it in a local Witchy Shop where I used to go pretty regularly.

I liked it very much, but just as with my first Tarot Deck (a very traditional Tarot de Marseille), we didn’t go along that well. Turns out, I wasn’t getting the results that I expected, got frustrated pretty quickly (my young teen self wasn’t that patient), and I ended up not replacing it when it got lost as small trinkets and knickknacks usually do when moving.

But I kept my fascination for this tool, and after a few years of not having one, the idea of purchasing another popped into my mind one day. I guess I must have talked about it at some point because a friend of mine took me by surprise and gifted me one for my birthday. She chose a Quartz Crystal pendant without even knowing my history with pendulums, she just knew me well enough to guess that I’d prefer something basic, clear, and simple.

I loved it immediately, but it ended up in a drawer so quickly that I’m ashamed to even admit it. It basically stayed in the dark for years, seeing the light of day only when I was getting it out for a couple of minutes to think about what I could do with it, how I could use it and incorporate it in my practice… before putting it back and forgetting its existence again. What a way to deepen my connection to it, huh?

Coincidentally, I got my answer when I went back to studying cartomancy and purchased my first copy of Wildwood Tarot. It’s my favorite Tarot Deck, and when it came into my life, I swear it almost literally screamed for me to craft a Pendulum Companion. One that I’d keep with the cards permanently, one that I’d use in association with them, and only them.

Without resisting this call whatsoever, I started to work on it, which got me to really think about the expectations I placed on this tool. I couldn’t care less about the heavy superstitions around Pendulums. Even trying a little suspension of disbelief – which is quite hard for me – my Analytical Mind was still annoyed by the stereotypes revolving around it. But working with Tarot changed my views on how Pendulums were supposed to function, and I drifted to a more psychological understanding of its possibilities and mechanisms.

Anyway, that’s the real starting point, when I began to create Pendulums myself, when everything finally fell into place. I made this little guy with a piece of wood I found on a Forest Walk, and I started to use this magical tool once again.

I’m still fascinated by Pendulums, and I made a lot of them since that particular one, several for my personal collection (which I’d probably show you another day), others ended up in my previous shop as I said before, and today they’re part of Wildera Art too. This time I made them differently though. I’m still using wood of course, but I wanted to try other shapes and I ended up with those you can see in my shop.

I like the roundness of this new version, the smoothness of the Wooden Pendant, the perfect weight and balance it adds to the whole. They’re slightly less raw, wild, untamed, but they also gained in precision, elegance, and delicacy in a way. They have a very different way of talking, and that’s fine with me.

I don’t know if I’ll make or sell the rough cone-shaped ones again in the future, but who knows? I might be tempted someday. Let me know if you’d be interested to see them coming back!