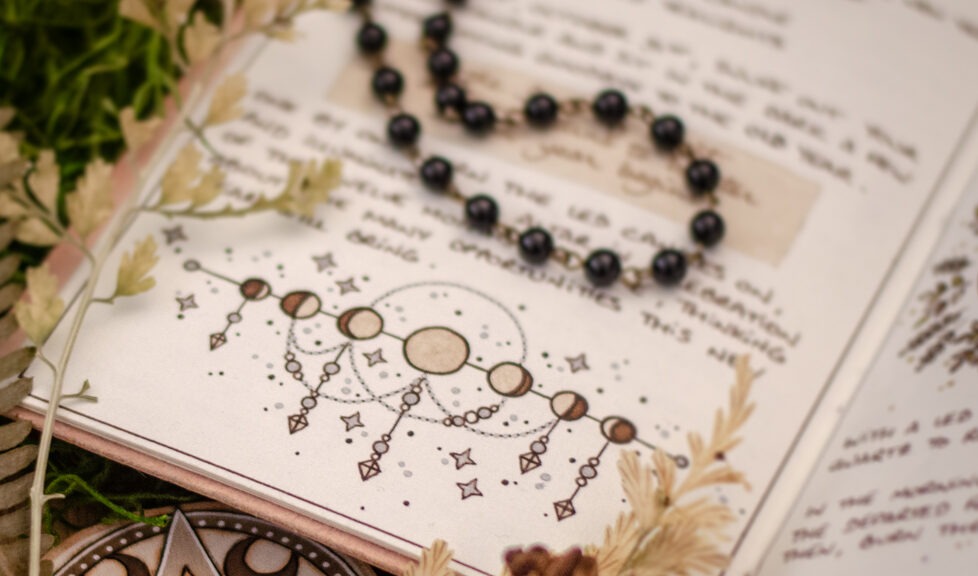 What? Never heard of it? Oh, right, that’s because I kinda made it up. Today is Ogham Day in my own Personal Calendar. Or should I say, in my own Wheel of the Year, since it’s actually based on this system.

Have you ever thought about your relationship with the traditional Wheel of the Year? Did you ultimately changed things up to a more personal level too? And perhaps more importantly, why would you do that in the first place?

The most obvious thing for me, and the first catalyst to my decision of re-imagining the traditional Wheel of the Year, was the beginning of my life as an expatriate. Trading a well-known environment for a new one with a totally different Fauna and Flora, not being able to recognize the usual markers of the seasons that I knew back in France… That was game-changing for me, and it had me thinking a lot about what I was going to do about these changes in my Witchy Practice.

A second reason was that, at some point, I wanted my calendar to include many other dates, decisive moments and significant life events, those that I tend to see through a spiritual perspective. This is something I wanted to implement for a long time, but never did because of the doubt that crept in whenever I thought about modifying “The Wheel”. You know, don’t mess with a working system, it won’t do you any good. But I finally gave space to the idea, and I have no regrets whatsoever.

Being part of a Greater System presents a lot of benefits. I find the idea of a globalized structure like the Wheel of the Year really awesome, partly because of the traditional heritage flavor of it, but especially because it allows you to celebrate the seasons in a similar way and at the same time as many others practitioners around the Earth (at least in the same hemisphere). This is one of the reasons why I definitely wanted to keep the Big Eight in my own calendar. But the thing is, I don’t resonate that much with some of these celebrations, so I needed to find a way to twist them a bit so they actually worked for me.

So I simply grabbed a piece of paper, I sat down one night to do a big brain dump of everything and anything I was thinking and feeling about the Eight Sabbats. I asked myself questions like: How do I relate to them individually? Which ones are my favorites? What are those I don’t care so much about? How did I celebrate them before? – having a look at my Witchy Journals was very helpful for this part, I can only recommend you do the same if you can. How do I really want to observe and honor them from now on?

A few of them ended up drastically modified regarding of their themes. Imbolc, for instance, has always been the Sabbat I most struggled with. The agricultural association of the first milk, its relation to the goddess Brighid, the influence of Candlemas, sometimes even Groundhog Day. Nothing about it has ever inspired me to actually do something and mark that day.

It’s always been one these Sabbats. You notice the date in your planner, and think: “Oh, Imbolc is coming!” with a bit of hope that this year is not going to be the same as the last. Few days later, you find yourself in the same position saying to yourself: “Oh, right, I forgot about Imbolc. Again. Nervermind, I’ll do better with Ostara.” But this attitude made no sense, it was draining and created nothing but disappointment in myself.

If I’m gonna include an event into my Wheel of the Year, it better be one that has some kind of significant impact, and that I really have the desire to observe. Otherwise, it’s not even worth the hassle of writing it down in my planner. So at the point being, I’ve completely redesigned my Imbolc Celebration in a way that is deeply meaningful to me and the events of my life. It has almost nothing to do with the Traditional Sabbat anymore, but it’s the best way I found to finally be able to connect with it.

Beside the Big Eight, I added another facet to the Wheel, with the Lunar Celebrations. I usually pay attention to the New and Full Moon, as well as the Half Moon, which is so great to work on Balance and Equilibrium. Special events too, such as Blue Moon, Eclipses, and so on. Having say that, it doesn’t mean I do a full-on ritual at each of these phases every month. Don’t get me wrong, I’m a Lazy Witch, but having it included in my calendar means that at the very least, I get a reminder to pull a couple Tarot Cards or refresh my stock of Moon Water.

I invented and included others events as well, more obviously linked to my spiritual practices. I now have a whole day dedicated to the Runes and another one for Oghams. This way I can think about my journey with them, craft a brand new set for myself and make it special, assess what I read and learned during the past year, and decide what will be my new goals with these amazing tools. The idea is to have a regular marker to take some time off and really think about this. I know myself well enough to admit that without this kind of event, I’d just let things go a bit stale and stagnant for too long.

Eventually, the last part of this thought process was just a matter of if and what I wanted to add to this structure. Like Days of Awareness. Earth Day? Yep, you can count it in. World Tarot Day? Same, obviously. Or I don’t know, Thanksgiving? Isn’t it always good to think about all the wonders in your life that you’re grateful for?

All right, there you go. I provided you with a non exhaustive list for what can be included in a re-imagined Wheel of the Year. I’ve taken the too-much-personal-stuff out of it, because let’s be honest, it’s not gonna be of any use to you. Also, consider this a work in progress. The Wheel keeps turning and I’m constantly reassessing the events and celebrations I want to include in my calendar. I find it so much better than being trapped in a fixed system that won’t evolve and change with me as I walk my path.

I hope that this was somehow interesting for you or, even better, that it inspired you to think about your own Pagan Celebrations and perhaps reinvent your own Wheel of the Year. As for me, I’m going to grab my favorite Ogham Set and treat myself with a reading tonight. It’s Ogham Day after all.