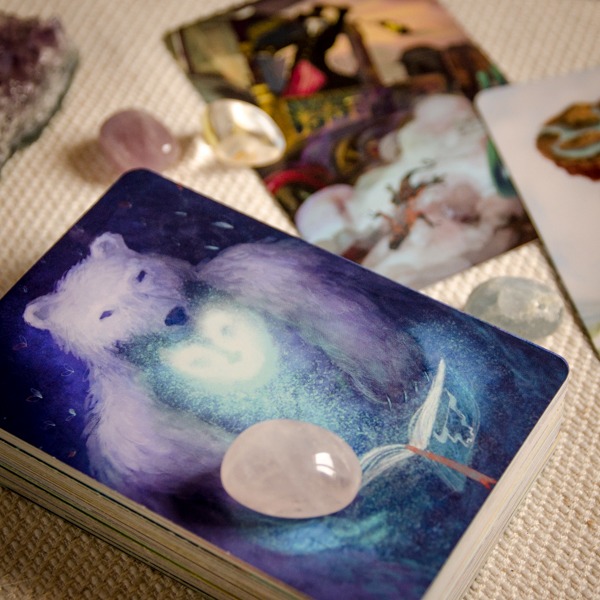 Divination has been part of my practice since the very beginning. To tell you the truth, it was one of the main gateways that led me to spirituality and witchcraft. Tarot, oracles, runes, oghams… I have created and accumulated a pretty little collection of different tools, mainly card decks. I usually read them for myself and a few close friends, but once in a blue moon, I also read tarot to other people when they ask me.

A good reason that brought me to collect oracle cards is that they allow me to keep with me some works of artists that I particularly appreciate. I use them to decorate a seasonal altar or a corner of my studio, as a way to inspire me while I’m working on new creations to list in the shop. So today, I’d like to share my collection with you, hoping that maybe these tarot and oracle decks will inspire you too 🙂

My very first deck! Well, almost. Actually, my first deck was a classic Tarot de Marseille from Grimaud, but I’ve lost it a long time ago, and we weren’t having a great relationship anyway 😛 This deck, however, has remained with me from the beginning, and I still appreciate it after all these years. One reason is that it’s the deck that led me to the sacred universe of Celtic Ogham.

‘Tis my good ol’ friend – even though it still looks brand new after all these years. The edition that I own is the first one; at the time, it was sold in a wooden box and was still called “Tarot”.

➸ Read my review of the Celtic Tree Oracle here (in French)

The Animal oracle is my second oldest deck, and surely the one I brought literally everywhere. It’s my companion, and I’ve used it almost everywhere: at college, in parks and woods, by the sea, in bars, and with many people… So many experiences have used it, so recently, I decided to trim its borders to refresh it a bit.

As for his vegetal companion, I bought it a few years later, but I love it just as much. They obviously work wonderfully together, and I tend to mix the two decks most of the time, without any distinction except the color of the back card (forest green for one, dark blue for the other).

The deck that accompanies me everywhere, all the time. The Wildwood is kind of my essential tarot, the one I’d take to a desert island the day I find myself in exile (don’t ask me why). Like the previous two, it is illustrated by Will Worthington, and if we forget about the poor quality of the cards, I adore it.

I trimmed its borders a few months ago (39 grams less!), and the pictures look much better. Actually, it’s just after trimming this one that I’ve chosen to go through the same treatment for the two druidic oracles. The edition I own is the very first, featuring a solid green card back, without the interlaced trees that have been added to later versions.

Let’s go with a complete change of style with the next one! Let me present you the Clow Cards, from the universe of Card Captor Sakura, an anime that I used to watch as a kid with my younger sister while eating junk food and enjoying each other’s company. This particular deck possesses a big sentimental value because it reminds me of such good times!

This is a deck that I wanted in its Japanese version because I’ve heard of its excellent quality of cards, illustrated with the original work of CLAMP. Unfortunately, the edition I was looking for was sold out for a very long time, you could only find second-hand decks at very, very high prices. So I just gave up, until a re-edition came out a few years ago, to celebrate the anniversary of the anime. I literally jumped on the occasion, waiting impatiently to get it in my mailbox, and finally, the Book of Clow was in my hands … (I rejuvenated at least 12 years that day :D)

This one just called me, and I quickly bought it (trust me, this is unusual, as I’m not a compulsive buyer at all). I immediately fell in love with its deep atmosphere and its amazing illustrations, carrying a note of sweet nostalgia (ohh and I almost forgot the wonderful back of the cards ♥). The day I received the deck, I did a little modification, by edging the cards in black.

It is an excellent oracle to work with your intuition (there’s no keyword to influence your interpretation of the cards, and the LWB won’t give you such clues about their signification), and it leaves plenty of room for imagination, dreams, contemplation, but also memory.

The deck that finally reconciled me with the Tarot de Marseille after hum… 15 years? It’s incredible to see the way I fought with my first Marseille deck when with this one, it was so easy. I mean, the symbols are more or less the same, right? Of course, the Tarot Noir is a reinterpretation of the classic Marseille, but in the end, it doesn’t get so far from the original, and the pips who have caused me so much trouble at the time aren’t more illustrated here. But I don’t know, there’s this particular and puzzling feeling that makes me love this one tremendously. Plus, it has these huge, beautiful golden edged cards ♥

The Tarot Noir really is my precious one. That’s why I don’t use it for anyone other than myself.

If the name doesn’t speak to you, don’t worry, it’s totally normal. This deck isn’t really an oracle in the first place, but a part of a nice board game named Mysterium. A mix between Cluedo and Dixit, with a murder victim who became a ghost seeking justice. The game takes place during the night of Samhain, with medium players gathered for a session of spiritism, and the ghost needs to make them guess the identity of the murderer only by suggesting ideas with the Vision Cards.

Before I even play this game for the first time, I knew I could use those cards as a support for divination, and I wasn’t disappointed at all. The illustrations are rich in symbols and allow an immense freedom for the interpretation. Since then, I even bought the card extension to open even more possibilities!

The Petit Lenormand has been experiencing a renewed interest for some time, and I willingly admit that I’ve succumbed to the temptation. I’m still in the early stages of learning this system, and the Middia Lenormand is my first deck of this type.

I hesitated a long time with the Celtic Lenormand (Will Worthington, obviously) but considering the changes and additions of cards that this deck includes, I’d rather keep it aside for later. For now, I prefer to learn the Petit Lenormand with a deck whose symbols are clear at first glance, and not tinted with a particular culture. The Middia Lenormand is perfect for this, very nice to look at and manipulate. What more could you ask for?

The latest addition to my collection, a self-published oracle that I’m still in the process of “testing” and studying right now since I received it at the very beginning of the month. So I’m not going to speak so much about it today, I’ll just show you what it looks like (note that I edged the cards in black).

➸ Read my review of the Ishsaar Oracle here

And with this one comes the end of this list of tarot and oracles deck currently in my possession, a relatively short one finally. If my wishlist seems to have no end, I remain pretty selective in my choices. I prefer to take my time before deciding to add a new companion to my collection. As I said earlier, I also use other divination materials such as runes or oghams, most of which I created from myself, but I’ll keep those for another article 😉