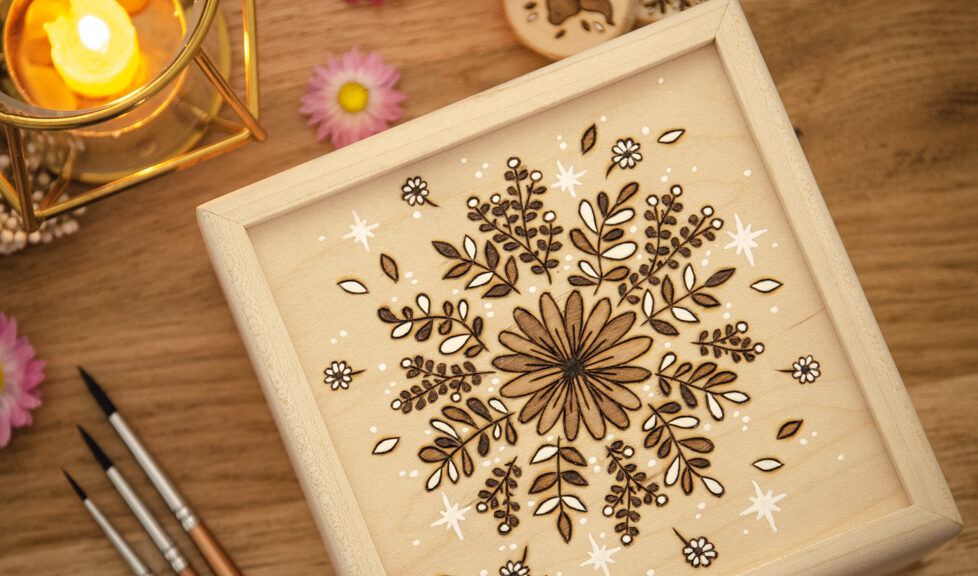 So many little leaves! I lost the count about halfway through (just kidding, I’m not that obsessed that I will actually count them).

If you don’t already know about this box or where it comes from, it’s made to accompany Wildera Lenormand, my very first published Oracle Deck! And the illustration is a replica of the ‘Bouquet’ card, one of my favorite designs that I actually painted twice because the first version didn’t make the cut.

Also I don’t know what is so satisfying about it but I love to watch how the candle burned as I worked on this project. I had it lit during the entire creation of the box and you can see it getting smaller and smaller until there’s almost nothing left.

I’m pretty sure some sort of Magic happens when I keep a candle lit on the side while my pyrography pen works its way into the wood. Both fires are feeding themselves, and as the flame of the candle is going down, the illustration grows into its final shape.

It’s the little things, you know, that make my work and days in the Atelier so enchanting and enjoyable. Magic in the details.

It's been a while since I posted something not rel

I finished this beauty yesterday afternoon, while

Magic from the Woods 🌲✨ Wildera Lenormand cus