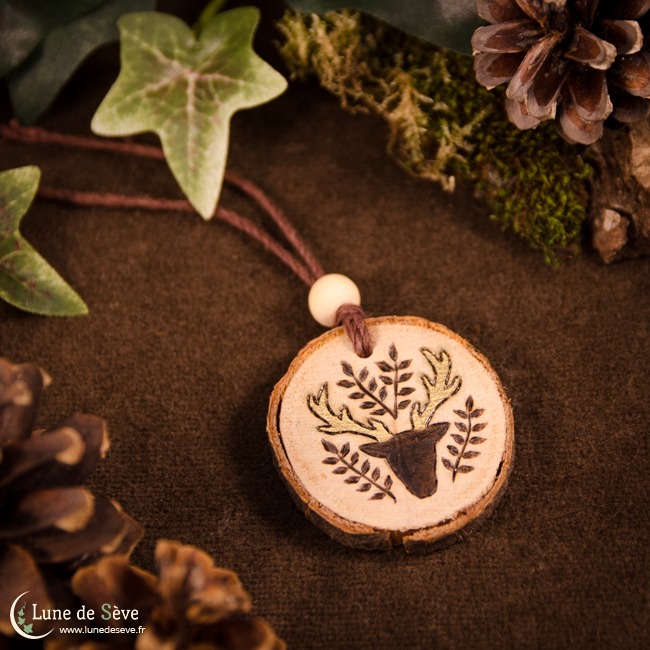 (… since it’s the name given by a friend to encompass all the last changes in the shop and the transition that came with it, it had to be mentioned somewhere!)

Change is in the air, and in my workshop too. Again, yes. I talked a bit about it lately, explaining the main reasons that made me put down my brushes. Things have made their way since, and I’ve been experiencing a period of creative fever, which resulted in a lot of new creations listed in the shop this week.

But let’s get straight to the point as there are a few different things I’d like to address and detail in this article.

🌿 My style is evolving

You may have noticed that my last creations are quite different from what I used to do before. In terms of drawing, I came back to my first love. From the (more or less) realistic animals that made the success of my Totem series, I went back to more stylized lines, focusing on shapes, symbols, and silhouettes (former graphist speaking here).

And to accompany this transformation, I also made some changes in the techniques I used. I’ve put aside my watercolor tools, which doesn’t mean I’d never get back to it in the future, but it’s not what I want to focus on right now. No more colors, I’ve decided to explore new things with walnut ink, a medium I’ve never manipulated before even if I always was drawn to it. And actually, I just love it! The way it gives different brown shades to the wood, the way it reveals and enhances the veins, the way it goes along with the darker lines of pyrography. Till this day, it has been such a great pleasure to work with it!

One particular thing didn’t change though: the gold leaf gilding, which you’ll keep seeing on most of my creations. Well, obviously, it’s kind of a part of Lune de Sève’s brand since the beginning 😉

🌿 One of a kind only

Unlike before, when I was doing 2 or maybe 3 copies of the same creation, from now on I will only make single pieces. I got to admit I’m a little bit tired of juggling between single pieces and small series, having to check my inventory as soon as I received a message about a jewel or another. And I don’t count the messages in which someone asks me to recreate a piece that has been out of stock for months. As you maybe know, since I tend to ramble about this over and over, doing too much of the same exact thing seriously hurts my creativity.

So, I guess at this point, I just have to simplify all of this. With “one of a kind” creations only, I’m assured to avoid boredom, and I’m providing you with the insurance to get a really unique piece, one that you won’t ever see anywhere else.

🌿 What about the creation on demand?

Until now, and to solve part of the problem called “I missed the creation I wanted, can you do it again pleaaase”, I had a plan: creation on demand. That is to say, I don’t necessarily have the stuff you want in stock, but if you want to get it, it’s still possible for me to redo it if you’re ok with the waiting part of the process. I’m thinking especially of the Totem series, which I definitely cannot create as single pieces because well, I’m slightly exaggerating but I mean, yeah, everyone just wants the one with the wolf :p

This system worked pretty well actually, but from now on, I won’t be doing it again, except for the classic runes and oghams sets (those which aren’t illustrated on the back). From my point of view, doing it this way didn’t resolve my issue with the “doing too much of the same exact thing seriously hur… ” (I think you got it now). So I’ll just stop here with these particular creations, and the Totem ornaments and boxes I have in stock right now will be available in the shop until they all find a new home.

But they will be the last ones. So if you’re interested in any of these creations, I’ll just say that there’s only one wolf Totem box available right now!

🌿 What about the custom orders?

In my latest blog post, I was talking about the fact that I’ve decided to listen more to myself, before taking so much of other’s opinions into consideration. I need to create in agreement with myself first, and it seems kind of incompatible with the custom orders, so what about them?

Well, I’m not stopping them for the moment, because I really like working on your projects too. They are a part of my fuel, and most of the time, custom orders push me to go further, they make me explore new possibilities and techniques, they make me think about objects and creations that I wouldn’t have thought otherwise. But, I’ll probably make some adjustments here to find more balance. Instead of putting aside everything else to prioritize a custom order (which sometimes led me to postpone new creations for the shop because I was busy working on several customs orders at the same time), I will now set a schedule and limit the number of places available over a given period.

I’ll speak more about it later on Facebook, but the idea is that I’ll now only take 3 or 4 custom requests per month, so I can focus on them correctly without being forced to pause everything else that is also important.

Hell yeah! Problem is, I need some physical space for the new creations, especially since among the old ones, some of them don’t correspond to me anymore. Sure they are a testimony to my path and the metamorphosis I went through, but if they could go and testify somewhere else while being of service to somebody, it’d be great as well ;p

That’s the reason why this year, I’m offering some sales on the shop up to -20%!

I know I can’t compete with big stores on this, not when they are up to -70%, but hey, we’re talking about lovely handcrafted items. No industrial work here at Lune de Sève, each and every piece that I make is imagined, dreamed, illustrated and created with my bare hands and a huge part of passion ♥

Have you ever thought about your relationship with

I've had a good look at my habits and routines rec

The problem is not having to stay at home - nothin

And another one ready! ✨🌲 I love the way the